Math in the News: Babies Can Do More Math Than We May Have Realized 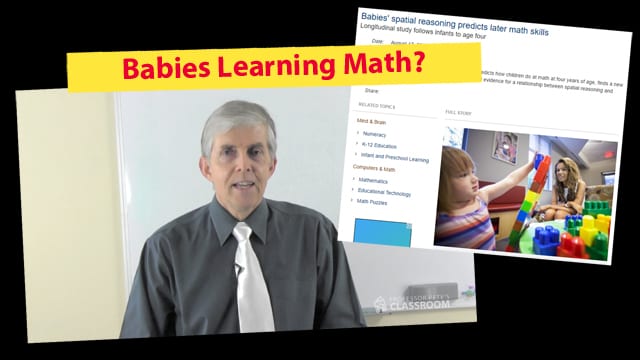 Infants as young as six months recognize interesting shapes. And babies who show higher spatial reasoning skills do better in math at age four. This is good news for parents and carers who purposefully try to help their children understand the world around them in explicitly mathematical ways: developing better spatial reasoning in infancy should result in better understanding of math generally when they start school.

Watch the video for more:

In this study, babies between six and thirteen months were shown images on two screens, where on one screen pairs of images appeared in a symmetrical arrangement. This caught the babies’ attention, and using eye-tracking technology the researchers were able to measure how often and for how long they focused on the more interesting images, and so deduce relative levels of spatial reasoning.

The really encouraging news for parents and carers who want to give their babies a head start before they start school is that higher abilities in spatial reasoning were associated with better math results at age four.

Since spatial reasoning is not a fixed ability but can be taught, I know what I will be doing when I get the chance with my grandchildren; all parents should do the same!

Does trying to expand young infants’ awareness of the world around them in targeted ways really help prepare them for school success? Share a comment below.